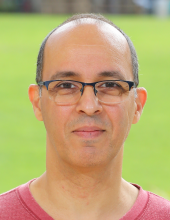 The research in my laboratory focuses on the relationship between the circadian clock, nutrition, metabolic diseases and aging. 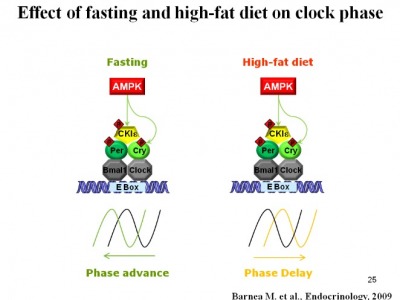 ראה גם: Oren_Froy
A. The mechanism by which the energy status shifts the clock phase: We found that the energy status of the organism can shift the phase of the circadian clock, i.e., fasting leads to phase advances, and high-fat diet to phase delays. Changes in the phase and daily rhythm of clock genes and metabolic pathways, as a result of high-fat diet, may lead to obesity and may explain the disruption of other clock-controlled output systems, such as blood pressure and sleep/wake cycle, usually associated with metabolic disorders. In addition, we deciphered the mechanism and showed that phosphorylation of AMP-activated protein kinase (AMPK), the cellular energy sensor, and its downstream signaling pathway is the key metabolic gauge that can shift circadian rhythms. 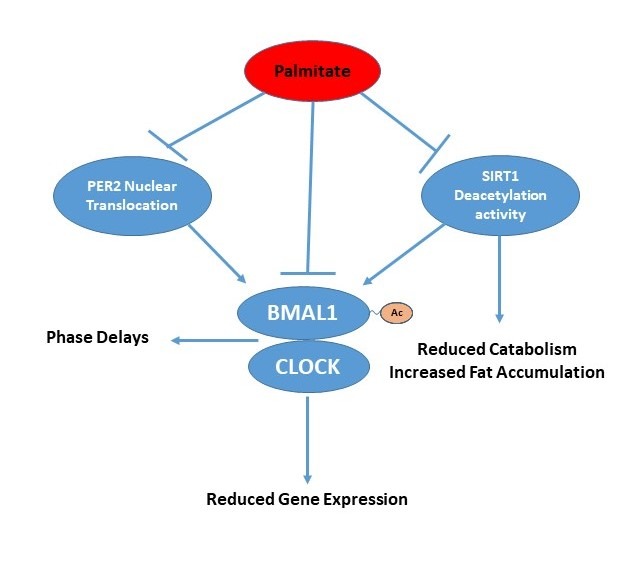 ראה גם: Oren_Froy
B. the role of fatty acids in clock functionality: Saturated fatty acids, such as palmitate, lead to circadian disruption in cell culture. Moreover, information regarding the effects of unsaturated fatty acids on circadian parameters is scarce. Mice were fed non-obesogenic doses of palm or olive oil and hepatocytes were treated with palmitate and oleate. Mice fed non-obesogenic doses of palm oil showed increased signaling towards fatty acid synthesis, while olive oil increased signaling towards fatty acid oxidation. Low doses of palmitate and oleate were sufficient to alter circadian rhythms, due to changes in the expression and/or activity of key metabolic proteins. Palmitate, but not oleate, counteracted the reduction in lipid accumulation and increase in the ratio of monounsaturated and polyunsaturated to saturated fatty achieved by BMAL1 overexpression. Palmitate was also found to interfere with the transcriptional activity of CLOCK:BMAL1 by  preventing BMAL1 deacetylation and activation. In addition, palmitate, but not oleate, reduced PER2-mediated transcriptional activation and increased REV-ERBα-mediated transcriptional inhibition of Bmal1. The inhibition of PER2-mediated transcriptional activation by palmitate was achieved by interfering with PER2 nuclear translocation. Indeed, PER2 reduced fat accumulation in hepatocytes and this reduction was prevented by palmitate. Herein we show that the detrimental metabolic alteration seen with high doses of palmitate manifests itself early on even with non-obesogenic levels. This is achieved by modulating BMAL1 at several levels abrogating its activity and expression.

C. the role of clock functionality in aging: We suggest that pronounced circadian rhythms could constitute an important mediator of longevity in calorically restricted mice. The notion that pronounced biological rhythms could extend life span had never been proposed in aging and longevity of calorically restricted animals and we brought evidence to support it using various feeding regimes, such as restricted feeding (RF) and intermittent fasting (IF). We also showed that long-lived transgenic mice have more pronounced circadian rhythms compared to the wild type control mice. In addition, we found that long-lived transgenic mice exhibit a period of exactly 24 h, whereas the genetic background, which has a normal life span, has a circadian period of 23.7 h, similarly to most mouse strains.

We have shown that timed feeding provides a time cue and resets the circadian clock leading to better health. In contrast, a high-fat diet leads to disrupted circadian expression of metabolic factors and obesity. We also found that combination of a clock-resetting feeding regimen with the clock disrupting high-fat diet resulted in reduced body weight suggesting that the timing of food intake is extremely important. This included the novel finding that an isocaloric feeding can lead to a different body weight if given at different times throughout the day. This novel concept was applied and corroborated in clinical trials, i.e., a high-calorie breakfast with reduced intake at dinner was beneficial and useful for the management of obesity and the metabolic syndrome in obese women, in lean women with polycystic ovary syndrome and in type 2 diabetes patients. We showed that breakfast consumption acutely affected clock and clock-controlled gene expression leading to normal oscillation, whereas breakfast skipping adversely affected clock and clock-controlled gene expression and was correlated with increased postprandial glycemic response in both healthy individuals and individuals with diabetes.