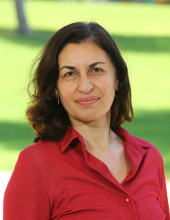 Contact the Institute of Biochemistry, Food Science and Nutrition:

During COVID-19 pandemic, the Niv lab is studying taste and smell changes:

Masha is co-initiator and leadership team member of GCCR, THE GLOBAL CONSORTIUM FOR CHEMOSENSORY RESEARCH

More Than Smell—COVID-19 Is Associated With Severe Impairment of Smell, Taste, and Chemesthesis
Recent smell loss is the best predictor of COVID-19 among individuals with recent respiratory symptoms

The research is ongoing, please share our survey https://gcchemosensr.org/surveys/ or participate in it in the language of your choice, if you were sick in the last 2 weeks.

We are intrigued by the sense of taste, and are aiming to understand how bitterness and sweetness are elicited and modified by molecules.

A long-standing unresolved puzzle concerns the taste of heavy water. Anecdotal evidence from the 1930s suggested that the taste of pure D2O is distinct from the neutral one of pure H2O, being described mostly as “sweet”. Next, Urey and Failla in Science (1935) concluded that, upon tasting “neither of us could detect the slightest difference between the taste of ordinary distilled water and the taste of pure heavy water”. We now clearly demonstrate that humans are able to distinguish D2O from H2O by taste, that highly purified heavy water has a distinctly sweeter taste than same-purity normal water and adds to perceived sweetness of sweeteners. In contrast, umami and bitter taste qualities are NOT enhanced by D2O, and mice are not attracted to it. The sweet taste of D2O is suppressed by lactisole, a known sweetness inhibitor of the TAS1R2/TAS1R3 sweet taste receptor, and HEK 293T cells transfected with the TAS1R2/TAS1R3 heterodimer and the chimeric Gα16gust44 G-protein are activated by D2O but not by H2O. Modeling and molecular dynamics simulations suggest internal water sites and effects on protein flexibility that may be involved in the mechanisms of receptor activation. The results of this exciting collaboration with the Jungwirth lab are now published in Communications Biology https://www.nature.com/articles/s42003-021-01964-y and highlighted in PNAS https://blog.pnas.org/2021/04/heavy-water-tastes-sweeter/ 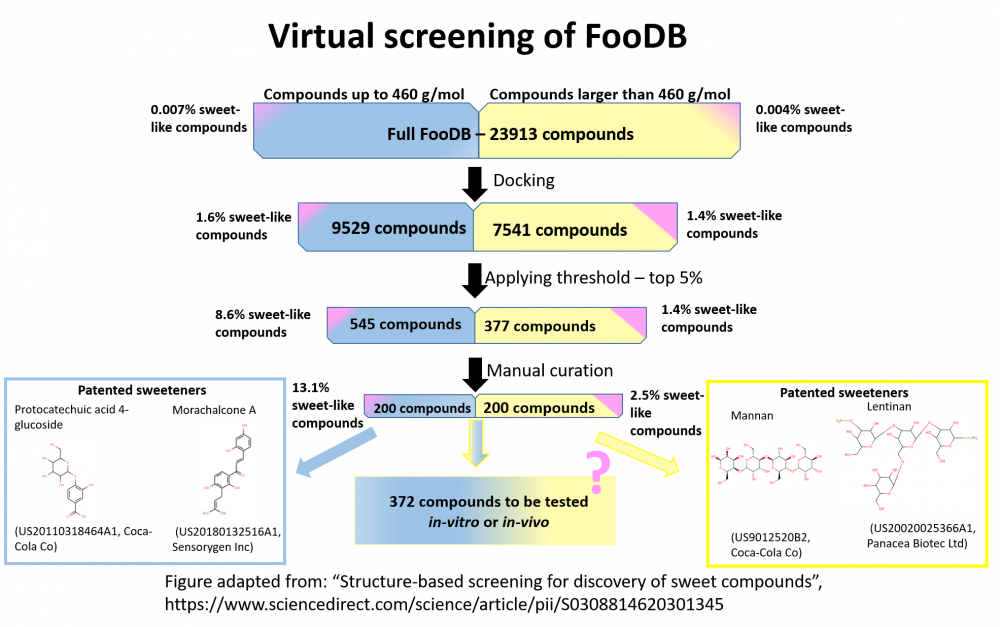 Being constantly hungry is a daily struggle for people with genetic defects in the brain's appetite controls, and often leads to severe obesity. The Niv lab participated in a study led by Moran Shalev-Benami on the mechanism of action of the master switch for hunger in the brain: the melanocortin receptor 4, or MC4 receptor for short. In this work, now published in Science, the international team has clarified how this switch is activated by setmelanotide, a drug recently approved for the treatment of severe obesity caused by certain genetic changes. Interestingly, the findings indicate that Ca2+ is required for agonist but not antagonist efficacy. Dr. Fabrizio Fierro, a postdoc in the Niv lab, has used Molecular Dynamics simulations to show the spontaneous entry of calcium ions into the receptor binding site, both in the presence or the absence of the drug. 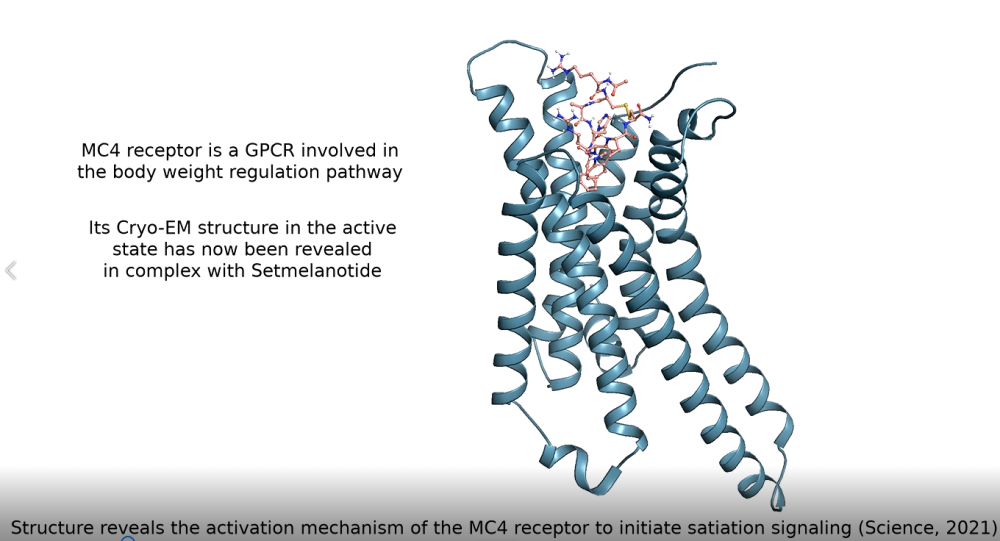 These results fill a gap in understanding MC4R activation and could guide the design of future weight management drugs.

Another major focus of our research program is bitter taste. There are multiple bitter taste GPCR subtypes (called T2Rs), and the number is species-specific (3 in chicken, 25 in human).

To study this complexity, we have established and expanded the BitterDB database of bitter ligands. The database currently holds information on over 1000 bitter molecules, their associated receptors in various species, SNPs in the receptors and more. There are over 23,000 users of the BitterDB worldwide. 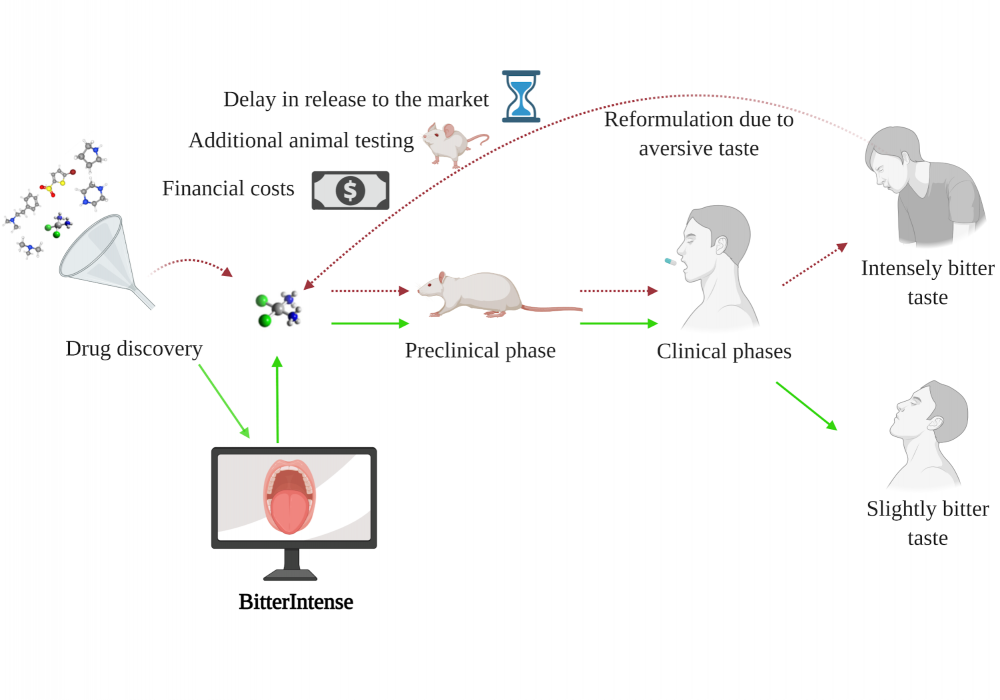 Based on this information, and by gathering information also on non-bitter molecules, we have developed a machine-learning classifier, which predicts from molecules chemical structure, whether it is likely to be bitter or non-bitter. This BitterPredict tool enabled to evaluate the abundance of bitter molecules in different datasets. Specifically, it is usually assumed that bitterness signals toxicity. We applied BitterPredict to datasets of toxic molecules and found that despite common assumption, toxicity does not strongly correlate with bitterness. 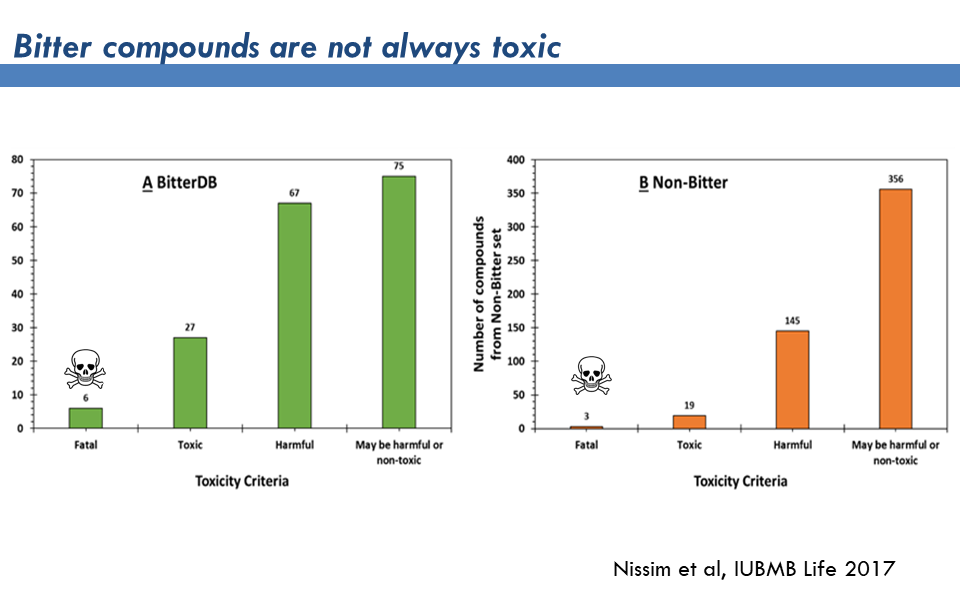 Another point of interest relates to molecular recognition: how is it possible for a single receptor to be activated by dissimilar ligands? We found that the chemophysical characteristics, subpockets, and ligand-dependent use of interactions of the orthosteric bindings site, provide the versatility needed for accomodating multiple ligands.

Interestingly, not only does a single T2R recognize multiple bitter ligands, but a single bitter molecule can activate several T2Rs. However, bitterants that activate multiple T2Rs are not more bitter (at least not more aversive for chicken) than T2R-specific ones. 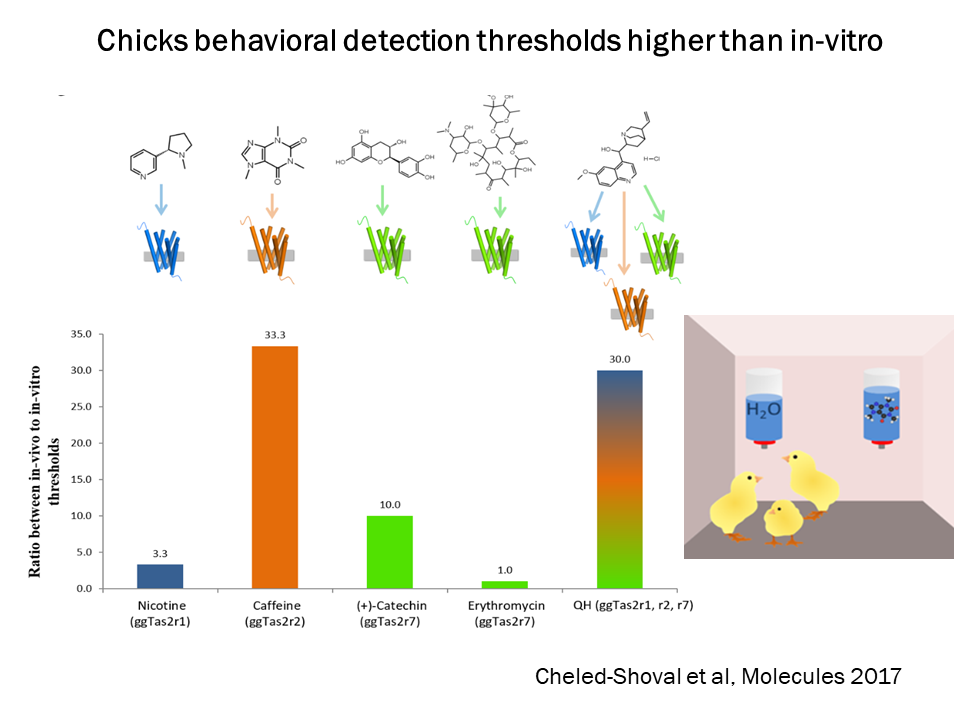 Because of bitter taste aversiveness, we hypothesized that might affect behavior and emotions. A significant negative effect on mood was caused by exposure to bitter-tasting mouth-rinse. Somewhat suriprisingly, the effect was asymmetric: sweet-tasting mough rinse did not elevate mood. 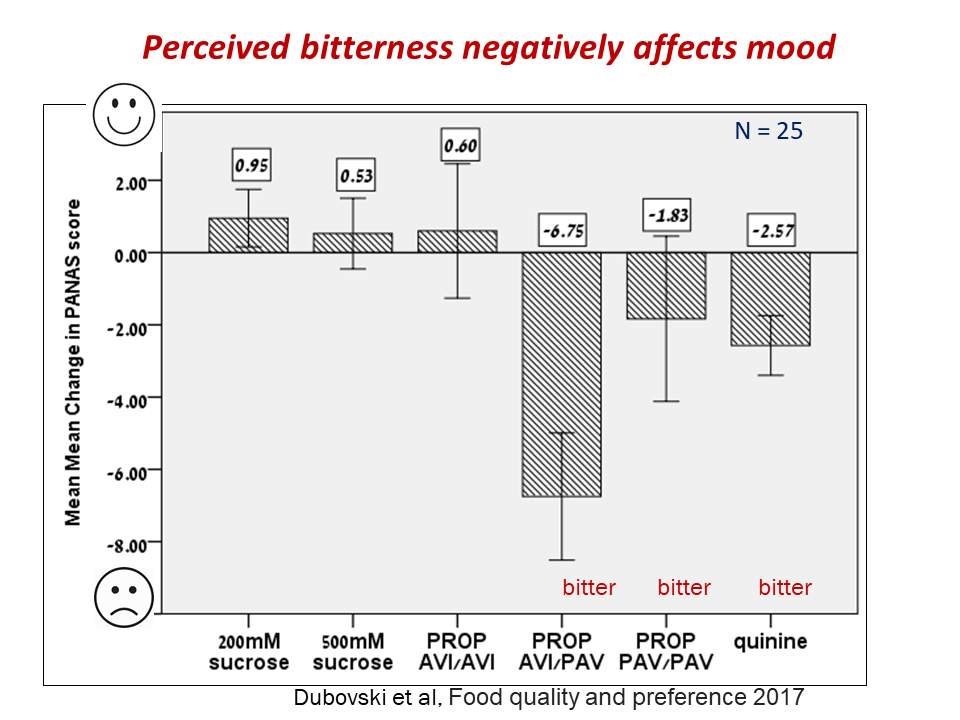 Novel sweeteners and taste modifiers are currently under study, via integration of computational, cell-based and behavorial techniques. 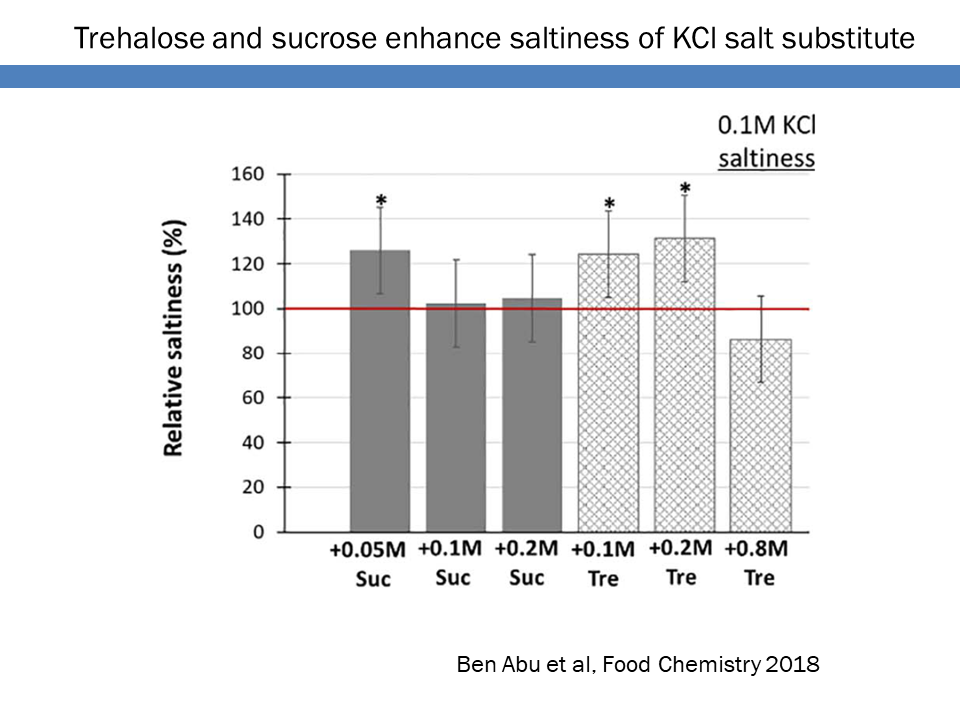 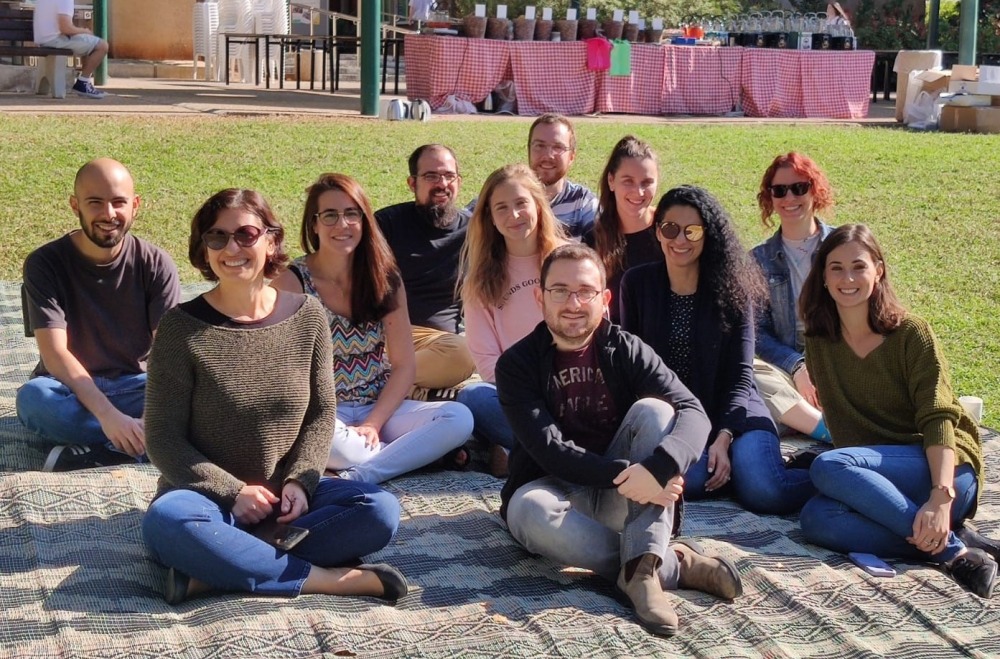