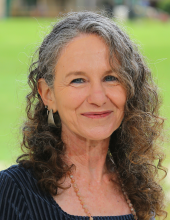 The reason that vertebrates do not look like, say, jellyfish is their skeletal system, which supports their body and protects vital organs while enabling efficient mobility. These functions depend on a precise and optimally-designed overall body proportioning determined by the size of the skeleton, which in turn is determined by the rate and duration of bone growth. Longitudinal bone growth occurs via the chondrocytes at the growth plates (GP), through a very tightly regulated process of endochondral ossification. The chondrocytes differentiate and produce cartilage anlagen (endochondral) that is sequentially calcified, degraded and replaced by bone (ossification). When the system is functioning correctly, our legs are of equal length, as are our arms. However, disrupted regulation is manifested in skeletal diseases, malformations and height disarrays.

My interest in GP metabolism began while working towards my PhD, when my research dealt with the effect of growth hormone (GH) on chondrocyte proliferation and differentiation. After completing my PhD, I continued my training at the Weizmann Institute of Science by joining the effort to understand the basis for inherited human skeletal disorders caused by mutation in FGF receptor 3 (FGFR3) leading to Acondroplasia, the most common form of human genetic dwarfism. In October 2006, I joined the Institute of Biochemistry and Nutrition at the Faculty of Agriculture of the Hebrew University.

During these years, we (see the list of the lab, young talented students) uncovered new roles for FGF in chondrocytes and in mutant mouse models. We described the interactions between the cytokine receptor family, and FGFR signaling pathway. I also initiated a new topic of research into the role of matrix metalloproteases (MMPs) in skeleton development. The MMPs are a family of enzymes that are involved in proteolytic cleavage of matrix components. These enzymes can be modulated by diet (Ca, Zn, Cu) and are subject to complex transcriptional regulation, indicating a genetic-nutritional interrelation during bone development. We showed, for the first time, the perivascular localization of cMMP9 and proved its role in vascularization of the avian GP. This project was conducted by several students in my lab and generated several publications, grants, and synergistic international collaborations. In collaboration with Dr. Dalit Sela-Donenfeld, we questioned whether by degrading the extracellular matrix, the MMPs mediate delamination and migration of neural crest cells from the neural tube. 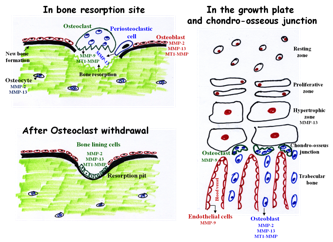 The main MMPs involved in bone resorption and endochondral ossification. During bone resorption MMP-9 and MT1-MMP are secreted by osteoclasts. However, these enzymes do not participate in matrix resorption per se but rather in osteoclasts migration and invasion. In contrast, MMP-13 is secreted from peri-osteoclastic osteocytes, translocate from the osteocytes into the resorption site where it participate in resorption. After osteoclast withdrawal, bone lining cells enter the lacuna and secrete MMPs (probably MMP-2, 13, and MT1-MMP) which remove demineralized collagen that was not digested by the osteoclasts. This “cleaning” is prerequisite for the subsequent deposition of a first layer of collagenous proteins in the resorption pit. MMP-9 and MMP-13 are the most important MMPs in endochondral ossification. MMP-13 is secreted from hypertrophic chondrocytes and MMP-9 from osteoclasts and endothelial cells

A continuing focus of interest of my lab is the effect of mechanical loading on the process of bone development. This is a multifaceted project, combining an in-vivo approach, in which we apply external loads on young fast-growing bones, with cell biology methods to understand the transduction of mechano-signaling in chondrocytes. Using various validation techniques, we identified load-dependent modifications in the major signaling pathways in the growth plate. These modifications reduce the number of chondrocytes in the GP, and therefore the latter's width and the final length of the bone. The possible involvement of the cilia in transducing mechano-signaling was further studied in tissue cultured chondrocytes by confocal microscopy and gene knock-down methods combined with loading protocols of cells in silicon chambers. This project involve collaboration with Prof. Nicolai Miosge dealing with the role of mechanical forces in tissue engineering of cartilage and mesenchymal cells. Within this research we also studied the effects of loading on bone phenotype in terms of architecture and mechanical properties. This research is carried out in collaboration with Prof. Ron Shahar, and has enabled us to purchase a micro-CT that significantly expands our scientific capabilities, combining our diverse expertise and joint interest in bone biology. 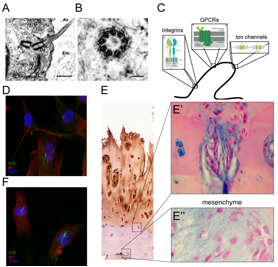 (A) Electron micrograph of the primary cilium (Ax), the distal (Dc), and proximal (Pc) centriole. Bar 500 nm. (B) Cross section of the proximal centriole. Bar 100 nm. (C) schematic presentation of the primary cilium with membrane signaling molecules that were described in it. (D) human articular chondrocytes and (F) CPC stained with acetylated α-tubulin (tb,green) Abs to detect primary cilium (arrows), phalloidin (ph,red) and DAPI (DAPI,blue). (E) Tissue from late stage of human OA exhibits surface fissures and cell clusters. Breaks in the tidemark are filled with blood vessels, and the bone marrow is visible underneath the OA tissue.

The broad aim of my research is to understand the role of nutritional and metabolic factors in bone development. The connection between under-nutrition and growth retardation is well documented. A trend of increasing height is recognized in countries where proper nutrition, exercise and fitness are more equally distributed. Children from developing countries with Protein-energy malnutrition (PEM) had significantly lower body weight and height than healthy subjects. Furthermore, animal studies clearly demonstrated the deleterious effects of PEM on linear growth. But what is the reciprocal? What if you eat too much? Are you going to over grow? Yes, it is recognized that overweight children are taller than age-matched, normal-weight children. This tall stature is often associated with an accelerated skeletal maturation and an earlier timing of puberty, but not with the final adult height. Thus it is clear that factors such as vitamin D and calcium are just the tip of the iceberg, and the role of nutritional factors in bone development has yet to be elucidated.

In the last few years, the connection between an organism's metabolic status and mature skeletal homeostasis has revolutionized the field of bone research, revealing the effect of leptin on bone density, and suggesting an endocrine loop in which a bone-specific protein (osteocalcin) affects insulin secretion and sensitivity. Despite these advances, other predictable link between organism's metabolic status and skeletal development has not been addressed. My research vision and activities aim to fill this gap. In this line, the projects we are conducting in the lab are dealing with:

The effect of different fatty acids on bone development. We have shown the role of W-3 in the processes of bone modeling and remodeling, and its positive effects in the process of young bone development. For this project, in collaboration with Prof. Betty Schwartz, we are using the fat-1 transgenic mice, which are genetically modified to endogenously synthesize W-3 PUFA. We further studying the differential effects of high fat diets based on SFA, MUFA or PUFA on bone elongation and quality, and on the metabolic consequences of these diets. Our results suggest that these fatty acids are not only energy sources but may serve as signaling molecules in bone cells. 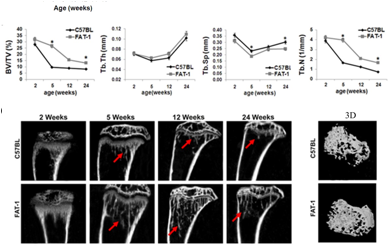 The effects of cytokines secreted from the adipose tissue on bone development and properties. In this project we are studying the effect of fat-derived cytokines on skeletal phenotype in-vivo by local or peripheral injections and by using mice models and in-vitro by chondrocytic or osteoblastic cell lines. By this combined approach we will get a new insight to the cross-talk between the adipose the cartilaginous and bone tissues during developmental stages. So far we have studied the role of leptin and adiponectin on embryonic bone development, and initiated an in-vivo model of obesity and metabolic syndrome during the early postnatal period by blocking the signaling of leptin. 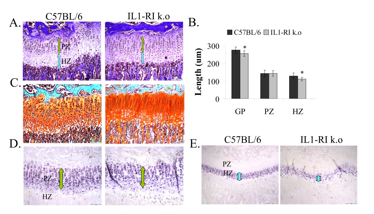 In a fascinating project we compared the plasticity of different mesenchymal cells in terms of differentiation and mineralization. Taking advantage of our expertise in chondrogenesis we were able to demonstrate that vascular smooth muscle cells undergo similar differentiation routs which results in the pathological condition of vascular calcification. We conducted a series of experiments in young rats (during their growth period) inducing arteries calcification by calcitriol injections. Using this model, and tissue culture approaches, we demonstrated the involvement of glucose metabolism in the physiological (in cartilage) and pathological (in vasculature) calcification. We further elucidated the underlying mechanisms regulating these events (through BGP and HIF-1Œ±) by knocking down these genes in-vitro and in-vivo, using the Si-RNA approach. 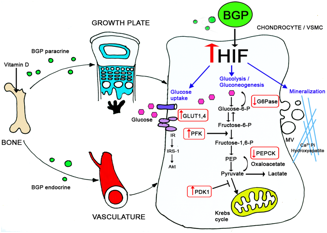 Proposed mechanism of action of BGP on glucose metabolism and mineralization.Vitamin D stimulates bone BGP production, which diffuses into the neighboring growth-plate and is released into the circulation. At the level of chondrocyte and VSMC, BGP stabilizes the hypoxia sensitive HIF-1α subunit leading to an increased rate of glucose uptake. Inside the cell, via HIF-1 stabilization, BGP channels glucose into the glycolytic pathway by increasing the expression of key enzymes PFK and PDK1, switching off the mitochondrial oxidative phosphorylation and stimulating less efficient, but much faster conversion of glucose into energy. Concomitant with elevation of glycolysis, BGP suppresses the expression of key gluconeogenesis enzymes, G6Pase and PEPCK. Altered metabolic status translates into augmented chondro-osteogenic differentiation state, contributing to the development of cartilage and vascular calcification

In our most recent project we explore the effect of the western diet on bone development. In recent years obesity has become a public health crisis in the western society has tripled. As children's body weights have increased, so has their consumption of fast foods and soft drinks. The proportion of foods that children consume from restaurants and fast food outlets increased by nearly 300% between 1977 and 1996. Children‚Äôs soft drink consumption has also increased during those years. Junk foods, fast foods and snack foods are high in fat and refined sugars and don‚Äôt provide appropriate levels of fiber, protein, vitamins and minerals for the growth requirement of growing children. Thus, beside obesity, diet based on junk food may cause malnutrition. We examine the influence of childhood obesity and malnutrition, caused by unhealthy and unbalanced diet on the development and quality of the post-natal bone while the main focus is on the growth plates, as well as on the metabolic state of the body. We use young rats as our experimental model, and discovered that rats fed junk food diet, had impairments in bone growth and structure, which could result from the deficiency of nutrients in the junk food diet.

The metabolic regulation of skeletal development is of great importance from both basic and clinical points of view. From a practical standpoint, these concerns are related to the dramatic rise in childhood obesity, which is now reaching epidemic proportions. From a more basic standpoint, the fact that adipocytes, chondrocytes and osteoblasts all originate from the same progenitors (mesenchymal stem cells) and are able to trans-differentiate into one another, raises enthralling scientific possibilities. Just imagine that by manipulating these progenitor cells, ideally via nutritional or mechanical strategies, we might shift their programmed differentiation from fat-forming to bone-forming cells: if this vision would become reality, we could help solve two major health concerns in the world today, obesity and osteoporosis.